When you arrive  at Cancun Airport you’ll get your first taste of Mexico.

As you cruise in on approach you’ll see the beautiful white sand beaches if you’re sitting on the right-hand side of the aircraft. Then you’ll descend over thick jungle until out of nowhere the runway suddenly appears.

Immediately when you step off the plane the heat and humidity will let you know you’ve arrived in Cancun.

There are a few important things you should know if you want to make it through the airport with the maximum of speed and minimum hassle. These things will allow you  to start your Cancun vacation the fastest possible way.

Cancun Airport is located approximately 12 miles (ca. 19 km) from downtown Cancun and is around a 30-minute drive. The airport is owned by ASUR (Aeropuertos del Sureste). It was the first airport in Mexico able to  provide simultaneous take-offs and landing from two separate runways.

In 2005 Terminal 1 was destroyed after Hurricane Wilma. Once repaired it was brought back into operation on a periodic basis while Terminal 3 was completed.

During this time Terminal 2 dealt with the vast majority of arrivals which resulted in overcrowding. Once Terminal 3 opened it then became the destination of the majority of charter flights.

During your flight you will be given given two forms to fill out – one for Immigration (Tourist Card or FM-T) and another for Customs (Customs Declaration Form).

It will speed up everyone’s passage if you complete the above forms before you land. Extra copies are available in the airport if you aren’t given the forms during your flight

The FM-T form allows you to remain as a tourist in Mexico for up to 180 days. Normally it is first issued for 30 or 60 days. You will need to visit the Cancun immigration if you wish to stay any longer than this.

Look after your FM-T, you will need to produce this again for your return journey. If you lose it, it can cause problems and delays. Plus you’ll have to pay to replace it. Don’t lose it!

Passports should have at least 6 months remaining from your date of entry, this is to match the maximum period your FM-T can be valid for. Reports suggest that this is not strictly enforced, but it is always better to be safe than sorry.

The Immigration Officer may ask you a few questions such as how long you are staying, where you are staying etc. But normally they will just stamp your passport and wave you through without any further questioning.

Once you have passed immigration you will need to collect your checked in luggage from the carousel before making your way to customs.

At customs, all bags first pass through an electronic scanner and at this point you hand in your customs form and if you have ‘nothing to declare’ you will be invited to press a button which will show either a green or red light.

UPDATE: It’s looking like the red/green light will be phased out throughout all of Mexico in the near future, although it is still in operation at some terminals in Cancun Airport for the present time.

A green light indicates that you can pass, a red light will indicate that your bags will be hand searched.

Searches are normally brief unless  something is discovered which may arise further suspicion. The list below indicates the most common restrictions:

Tips For Getting Through Customs Quickly in Cancun

Don’t get into  conversations with people who are offering free trips or meals, these are usually timeshare salespersons and there is no such thing as a free lunch. However, do look out for the ladies in Mayan dress handing out small plastic bags. These are filled with money off vouchers and useful maps and guides. 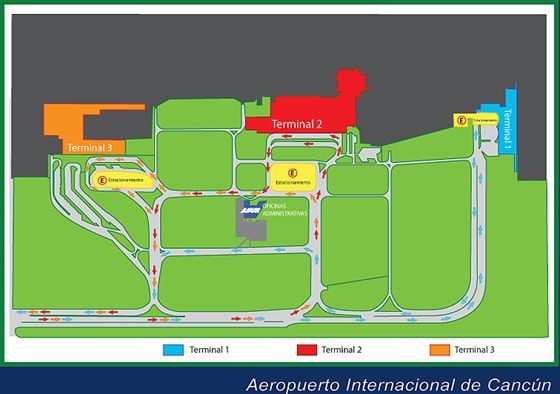 Following an investment of $150 Million USD Cancun’s Terminal 3 became fully operational in 2007. The first terminal and all its faults (lack of air conditioning, few shops and restaurants) is now devoted to freight only.

More improvements followed in 2009 with the addition of a new 2.8 km runway. A new control tower was added, which at 97metres tall is the tallest in Latin America and among the top 20 highest in the World.

In 2014 Terminal 2 was expanded in order to cope with growing demand, shortly followed by an expansion to Terminal 3 which was finished in March 2016. Terminal 4 followed in 2017.

Cancun airport is now Mexico’s second busiest after Mexico City. However, it is number one in numbers of International travelers with 21,415,795 passengers in 2016 representing a 9.28% increase over 2015.

Cancun Airport is now a much more pleasurable experience than it used to be 10-15 years ago. It is equal to any International airport in the World in terms of facilities and exceeds most.

A far cry from the tiny little airport that opened in 1974!