Are There Sharks in Cancun? 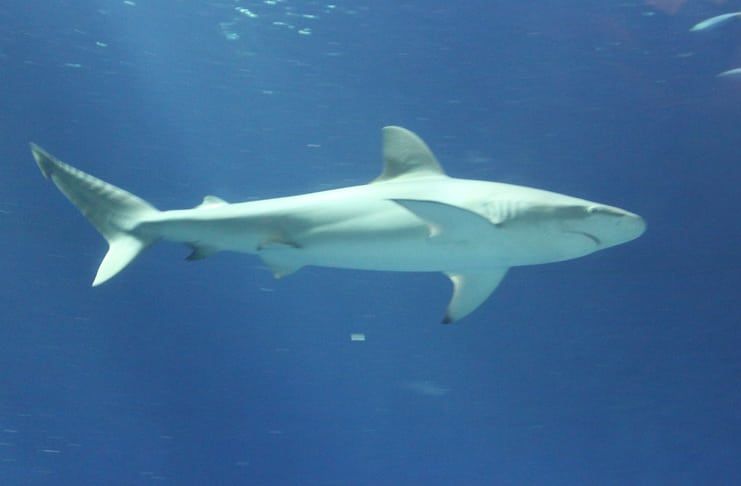 Are there sharks in Cancun is a question many people ask. However, there doesn’t seem to be much information on the Internet to answer that question. Let’s put that right.

The straightforward answer is yes there are indeed sharks in Cancun. But if you are concerned about being attacked by one, stop worrying right now!

There are sharks in all Seas and Oceans except for the Dead Sea (too salty) and very few in the Arctic. Sharks are distributed worldwide and a vital part of any marine ecosystem. They help to maintain marine diversity.

They ensure that species further down the food chain don’t over populate and contribute in keeping the reefs of the Caribbean in healthy condition by doing so. And that’s something we can all agree on.

Shark attacks are very rare worldwide in general. There have only been a few recorded incidents of attacks by sharks in Cancun, none of which were fatal. In fact, the country with the highest incidence of shark attacks is the good old USA. Source

Further statistics from SurfersToday below (at the time of writing) shows Florida being the number one hotpot for shark attacks in the World. Florida has had 848 incidents. California comes in 5th with 124, South Carolina 7th with 105, North Carolina 9th with 67, and Texas 16th with 44.

Mexico (the whole country, not just Cancun) scores a lowly 18th registering only 40 attacks over the same 450 year time period.

The fact is you are thirty times more likely to be attacked by a shark in the US than you are in Cancun!

However, it’s quite understandable to be fearful of sharks in Cancun. Particularly with movies such as Jaws and the occasional shock and awe headline that some newspapers like to run with.

I am pretty sure the sea did not “fill” with blood, the Caribbean Sea is a huge volume of liquid that would need to be displaced! And the implication the shark ‘targeted’ a Canadian is nothing short of sensationalism. 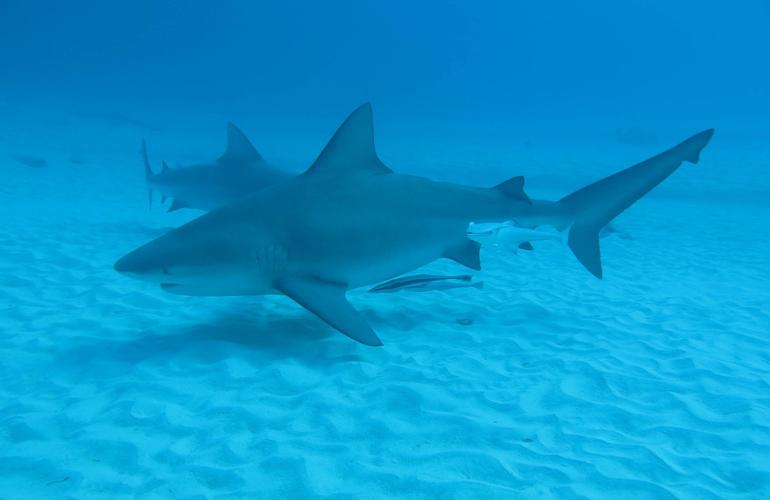 Nevertheless, shark attacks have indeed occurred in Cancun. There will likely be another at some point in the future, as long as sharks and tourists share the same environment.

Strangely, there were several attacks in a very short space of time in 2011. That’s 8 years ago as I write this post.

There’s an interesting documentary about this which speculated various hypotheses why the attacks happened when they did. The documentary is “When Sharks Attack” by National Geographic, Series 4 Episode 5. Unfortunately, it’s not available on YouTube, but if you get a chance to see it it’s an interesting watch.

Those were the first attacks for many years and as far as I know there haven’t been any recorded incidents since.

Personally, I think it’s one of those statistical flukes. Like when you lose your car keys twice in the space of a week, and then don’t lose them again for another ten years 🙂 Nevertheless, I don’t expect that to be much consolation to the unfortunate people who were injured.

To further calm your nerves it seems that all the attacks by sharks in Cancun were provoked.

They were a result of unintentionally poking, touching or perhaps coming close to a maternal shark’s newborn babies. Fortunately, none of the attacks resulted in a fatality.

It follows that attacks by sharks in Cancun are extremely rare and the chances of you being the victim of one are so remote it’s not something you should even worry about at all.

There are some locations around the World where the risk of a shark attack is regarded as sufficiently serious for the authorities to instigate security measures. Cancun is not one of those.

There are a (very) few observation towers located along Cancun beaches to ensure lifeguards have an elevated view of people enjoying the water. But that is more as a general water safety precaution than a specific shark attack threat.

There are no shark nets on Cancun beaches.

What Kind of Sharks Are There In Cancun?

Aside of timeshare sharks at the Cancun Airport, the Caribbean is host to around 40 different species of shark. This includes the small dogfish kind and several other species that are very similar in nature or rare. The most prevalent shark species in the waters surrounding Cancun are:

Bull sharks in Cancun are around 7-8 feet long and weighing up to 290lbs. When fully grown the bull shark has a broad flat snout. It has been known to travel into freshwater rivers up to 700 miles inland (Alton Illinois, Mississippi River).

Bull Sharks often inhabit shallow waters, the male is territorial and is one of the three most aggressive shark species.

I actually saw a Bull Shark in Cancun once during one of our catamaran cruises. The shark was a dark shape in about 12 feet of water, half a mile from shore and casually passed by.

Our boat crew confirmed it was a Bull Shark and that they rarely see them even though they are seaborne daily. In around 500 cruises out to sea in Cancun that is the only occasion I’ve seen any kind of shark in the wild.

The Caribbean reef Shark can measure up to 8 feet (2.44 m) long and weigh up to 150lbs. It is dark gray with a white underbelly and is normally harmless. However, it has been known to be aggressive in the presence of food and worldwide has been responsible for a handful of attacks.

With their infamous head structure these are easily recognized. They grow up to 19 feet (6 m) in length. They are light gray with a greenish tint. Hammerhead sharks have known to attack humans but seldom, and no fatalities have been recorded.

Makos grow up to 12 feet (3.66 m) long and can weigh as much as 1200lbs. They are blue gray in color and can be found in warm waters worldwide. They are the fastest swimming shark, capable of swimming up to 25mph (40.23 km/h) with bursts to 56mph (90.12 km/h). Generally non-aggressive, they have been responsible for one fatality in the last 450 years across the World.

Growing up to 10feet (3.05 m) in length and weighing up to 200lbs their yellow coloring acts as camouflage when swimming over sandy ground. Another non-aggressive species that has been responsible for only 10 attacks in the last 500 years
*Attack statistics taken from the International Shark Attack File

These sharks grow to around 10 feet (3.05 m) and have a broad head. They stick close to the ocean floor have tiny teeth which they use to feed on crustaceans and small fish.

Nurse Sharks are extremely sedentary and are an attraction for divers in the Riviera Maya. Sadly, these are also the sharks that are enclosed in small pens for tourists to have their photos taken with on Isla Mujeres. More on this below.

Whale Sharks are the largest fish in the ocean, with adults averaging 32 feet (9.75 m) and weighing in at over 20,000lbs or 9 tons! They are filter feeders and thrive on plankton, fish eggs and crustacean larvae.

A migratory species Whale Sharks can be found off the coasts of Cancun from mid May to September and it is possible to book whale shark tours to swim alongside these graceful giants. They are totally harmless.

Sharks and Tourism in Cancun

Sharks are fascinating creatures, and their overstated reputation as man eaters makes them a target for thrill seekers. Not surprisingly there are several tourism opportunities and tours that have emerged surrounding them in Cancun and the Riviera Maya.

Shark Fishing Charters in Cancun are available where fishing boats will take you out 10-20 miles (ca. 32 km) or so beyond Isla Mujeres where Bull Sharks are your quarry. Boats typically leave very early in the morning for 6 or 8 hr duration and have a capacity for up to 6 fishermen.

During mid May to September Whale Sharks pass close to Cancun and Isla Mujeres as they migrate following their plankton food source. They often congregate in schools of 20 or 30, sometimes up to 100.

Small boats take tourists out to see them and snorkel beside them. The number of licenses granted to boats are strictly controlled by the Govt and there are many rules in place such as no touching the sharks or diving beside them.

We have a page devoted to Whale shark tours you may be interested in if considering such a trip. It’s one of those tour experiences that you’ll remember forever.

The Cancun Aquarium located at Plaza Las Isla has a large tank that contains several species of shark that can be viewed at close quarters behind the safety of glass.

They also run an optional activity where you can be submegered inside an iron cage as the guide feeds the sharks from within the same cage.

I think I would give this one a miss myself. Some Playa del Carmen dive operations will take out experienced divers and attract sharks with the use of bait.

There’s some discussion about whether this may make the sharks more aggressive with humans. But it’s an option for those with balls of steel 🙂

This is one tourism ‘business’ I and many others can not support. There are three or four locations on Isla Mujeres where small pens have been built alongside the docks. The docks are where the catamaran boats arrive for their lunchtime stopover.

Inside the pen is a Nurse Shark that has been captured from the wild along with a Guide. Tourists are encouraged to enter the water to hold or stroke the shark and have their picture taken. The guide asks for a few dollars for facilitating the ‘service’. He then repeats this a hundred or more times a day, 7 days a week.

Some people say that the Nurse sharks are released and replaced regularly with new captives and are well cared for. Personally, I have my doubts and find it hard to believe to be true. This is an activity I would encourage the eco-friendly tourist to refuse to support and avoid.

There are sharks in Cancun but chances of being attacked by one are so remote as to not even give a second thought. Sharks are an essential part of the Caribbean ecosystem.

Sharks have now become an intrinsic part of Cancun tourism. Some practices of which are natural, well regulated and should be enjoyed. Others are cruel, some are borderline.

You can make your own mind up about which is which, and whether you choose to support them.